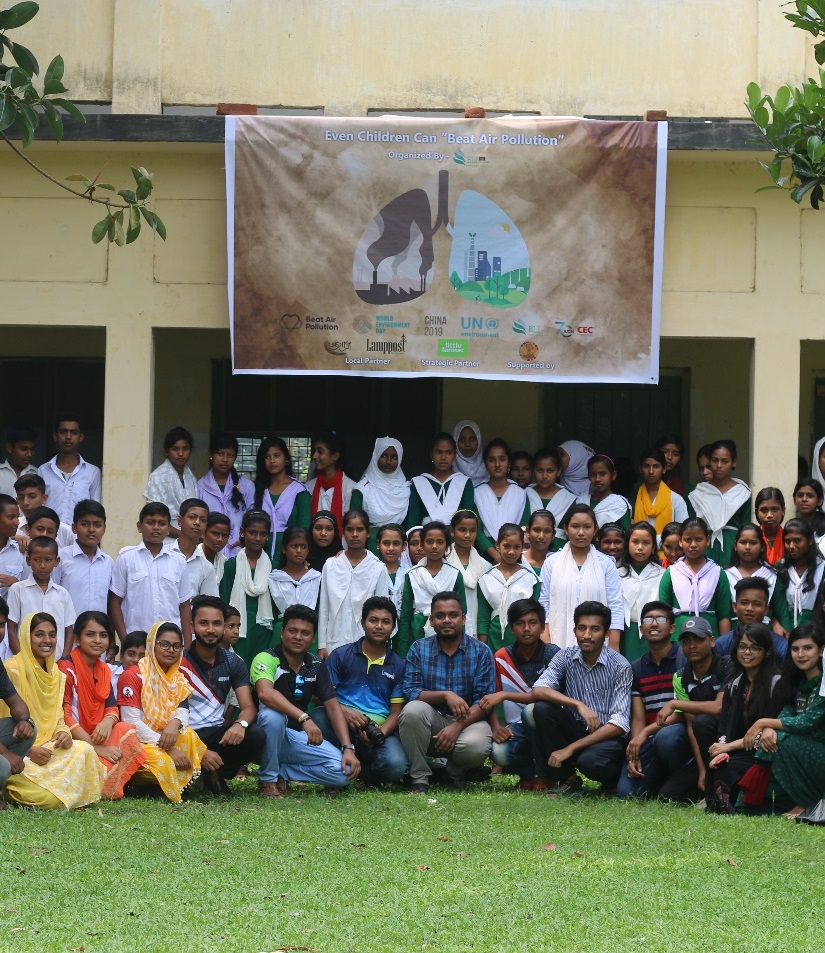 With the intention to accomplish a solution to the theme of “Beat Air Pollution” in mind, the team of Blue Luxury Investments Bangladesh celebrated World Environment Day 2019 in Ranisankail, Thakurgaon, on the 16th of June, 2019. The project was designed to make children aware of the air pollution around them and why it is harmful, and inspire them to fight air pollution through their personal initiatives.

Thakurgaon is one of the warmest places in Bangladesh, and in Ranisankail, the children have to do their classes in tin-shed buildings with a few small fans in temperatures as high as 40°C. Hence, the discomforts of global warming are an issue most of them can deeply relate to. This is why we chose the children of a couple of schools in Ranisankail as the perfect target group for our project at hand. The two schools we chose were Ranisankail Pilot High School and Ranisankail Public Primary School.

From our headquarters at Dhaka, we had taken a few educational videos related to air pollution, deforestation and global warming, an educational comic, and a sack of seeds supplied by our partner, “Nogorkrishi”. The videos and comic would serve the purpose of making the children aware of the environmental issues around them through cartoons of their interest, and the seeds would then be presented to them as weapons to fight the threat that they had just been acquainted to.

We reached Ranisankail Pilot High School at 11:00 am on the morning of 16th of June 2019. After meeting with the respected principal of the school, we set up our multimedia in the tin-shed hall of the school, arranged the children before the screen, and began our first awareness session at noon.

After a brief introduction about Blue Luxury Investments Bangladesh and World Environment Day by Mr. Touhidul Alam Nishar, CEO of the former, the first video was shown. This animated video acquainted the children to the concept of greenhouse effect and the gases that causes it. The video was broken down and explained to the children by Mr. Shaker Mahmud Rafa. An interactive session conducted by Mr. Saiful Islam Fahim followed. Afterwards, Ms. Samia Alif Esha conducted a comic session featuring two children fighting deforestation in a modern city.

These sessions were heavily participated in by the children of the school, who were not only delighted to gather new knowledge, but inspired to take a stand against such issues with diligence. Lastly, when the seeds were distributed to them, the young children were so excited to receive the seeds that we were not able to retain even one packet of seeds to ourselves.

We finished our sessions at 1:30 pm, after which Agrazatra, our partners for the project, conducted a session on the Internet and Cyber Security. The programme finished at 2:00 pm, and we then moved to Ranisankail Public Primary School.

The same events were repeated at Ranisankail Public Primary School, and the programme came to an end at 5:00pm.

As young children like the students of these schools in Ranisankail are the future of Bangladesh, we at Blue Luxury Investments Bangladesh feel that it is our duty to educate and inspire them to fight environmental issues that is a threat to the existence of our planet. We feel ourselves to be successful in encouraging the target group that we had chosen and are confident that the children we taught will be attempting small scale afforestation in their own areas.